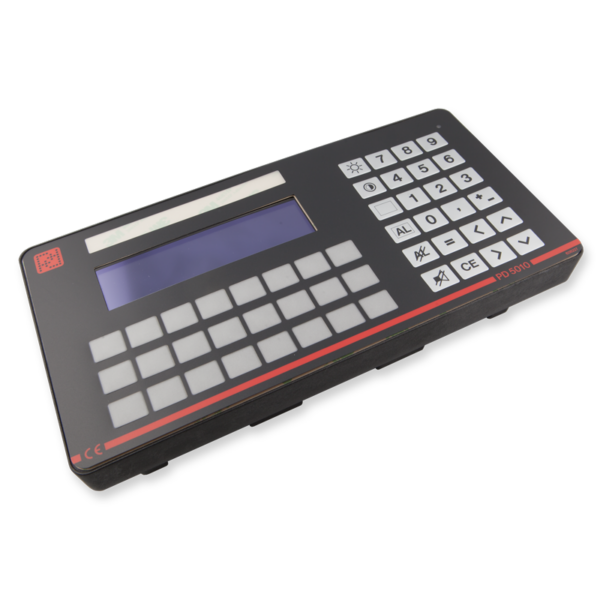 APPLICATION
The PD 5000-Series of controllers has been developed as the 2nd generation of P-NET fieldbus controllers (masters), for use as distributed computing elements within either highly complex or simple process control systems. The PD 5000-Series ranges from the PD 5000, a controller without keyboard/display, via the PD 5010 and PD 5015 having sealed keyboard/display, to the PD 5020 with built in colour graphics card. Together with possible additional controllers and PC’s, the PD 5010 is used in conjunction with other distributed input/output modules (slaves) such as digital, analogue, flow, and weight nodes, to form a complete control system, which all communicate via the P-NET fieldbus (EN 50170 Vol. 1). Since the Controller offers dual P-NET ports together with an RS232 connection, it can be used to link two P-NET sections (multi-net), or as a gateway to other communications media, including PC’s, modem’s etc. Although the PD 5000 can be utilised independently as a powerful processing element, the PD 5010 and PD 5015 enable a controller to be used as an operator input and display interface. Furthermore, the PD 5020 enables the controller to be used with a VGA monitor, a standard PC keyboard and a mouse, as a Supervisory Control System.

SYSTEM DESCRIPTION
Programming
The Controller is programmed in Process-Pascal, which is an extension of standard Pascal, allowing easy declaration and utilisation of P-NET variables and objects. Programmes are developed on a standard PC, compiled and down loaded directly via a PC/P-NET interface card, or via the RS232 interface. Program code can be down loaded to FLASH memory or battery backed RAM.

Memory
The PD 5010 has on board memory consisting of 512 Kbytes of FLASH and 512 Kbytes of lithium backed RAM. In addition, a 128 Kbyte EPROM is provided which holds the Operating System. The use of the RAM Extension Board (PD 5090), extends each of the FLASH and RAM memory capacities to 1 Mbyte.

Channels
In keeping with the standardised, object orientated channel structure of other P-NET devices, the PD 5010 provides a structure of up to16 Channels, dealing with the configuration and use of Communication Ports, Program control, keyboard and display usage, and the digital alarm output. As with all P-NET devices, the Service channel (channel 0) provides the ability, amongst other facilities, to identify the device and to provide the means to set the node address.

Communications Interfaces
The Controller has three serial communications interfaces, configurable for PNETmode, DatamodeIn, DatamodeOut or DatamodeInOut. Two of these provide galvanically isolated RS485, multi-master, multi-net interfaces with the P-NET fieldbus, and run at the standardised speed of 76.8 Kbaud or at 9.6 Kbaud. In non PNETmode the communication channels are used to provide an interface to other communication protocols using RS485. In non PNETmode the Baud rates are adjustable between 1.2 and 76.8 Kbaud.
The third is a standard RS232 interface, which has an adjustable Baud rate of between 1200 and 9600. This communications channel is used to provide an interface to printers, modems, barcode readers etc., as well as other communications protocols using this medium.

Digital Channel
The PD 5010 has a built in digital channel, controlling the operation of the “Alarm Output” available at the rear of the controller.

Keyboard/Display
The PD 5010 provides a 48 programmable key layout using sealed, membrane switch technology. A customised self adhesive keyboard overlay can be used to provide the operator with the ideal visual interface associated with the usage of the controller. The associated display is an LCD Supertwist technology type, having a resolution of 256 by 64 pixels, providing adjustable contrast and wide viewing angle. An adjustable LED back light is also provided. A program controlled LED is placed in the front of the Controller.